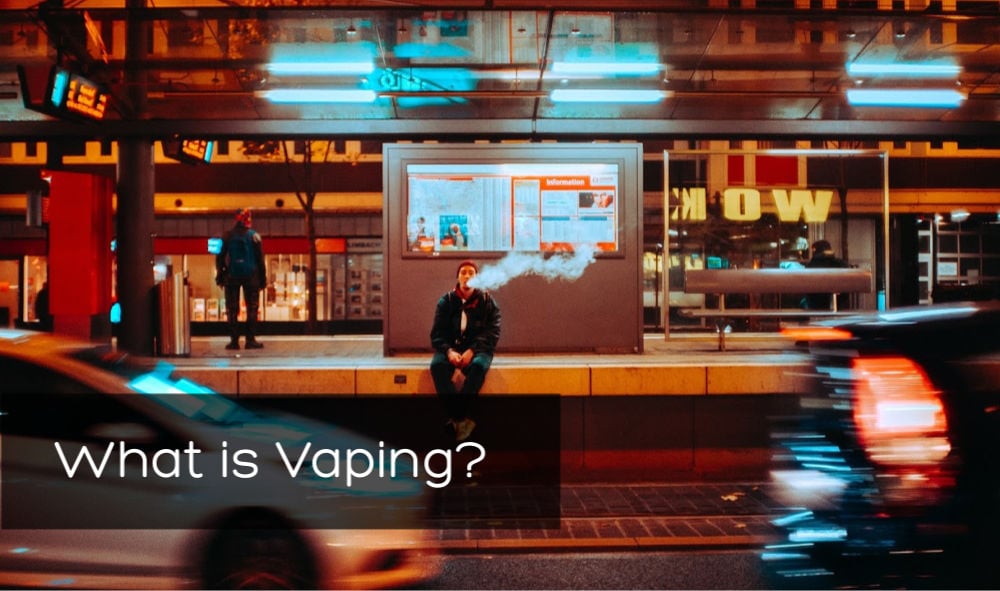 How do vapes work? What is vape juice? Is vaping safe? More Vaping FAQs

In the last few years, have you asked yourself, "What is vaping?" If so, you aren't alone. Vaping continues to become increasingly popular, but there are still a lot of people who don't know exactly what vaping is or how to do it.

In this guide, we'll cover everything beginners need to know about vaping. Let's start with how vaping is different from smoking.

Smoking incinerates plant matter, which produces a thick cloud that contains plant particles, tar, and various other substances. Vaping, on the other hand, doesn't involve incineration. Instead, this smoking alternative vaporizes the liquids and oils in a substance, leaving plant matter and other undesirable substances behind.

How do vapes work?

Vaporizers operate by heating a substance to its boiling point. When oils and liquids boil, they convert into vapor, which you can then inhale. Vaporizers stop short, however, of heating substances to the point that they incinerate.

Plants that express oils, such a hemp flower, can be vaporized in their natural forms. Other plants, like tobacco, can't be vaporized so easily, so the active ingredients they contain are first extracted and combined with carrier oils.

Technically, any device that heats substances to generate vapor that you can inhale is a vaporizer. For the purposes of this guide, however, we will limit our discussion to handheld vape pens and related devices.

What is vape juice?

Vape juice is a type of vaporizable liquid that is loaded into cartridges. The two most common components that go into vape juice are vegetable glycerin (VG) and propylene glycol (PG), both of which are considered to be safe for inhalation.

In most cases, PG and VG are used as carrier oils for nicotine, the active ingredient in tobacco. You can't vape nicotine on its own since this substance takes on a crystalline rather than an oil form. Nicotine dissolves into PG and VG, however, making it possible to vaporize this tobacco constituent.

Vape juice might be combined with a variety of different natural and artificial flavoring agents. Some vape juice products contain MCT oil, a derivative of coconut oil, but research indicates that this substance may cause a dangerous condition called lipoid pneumonia. The only vape carrier oils that are considered to be safe are PG and VG. Learn more about which vape juice ingredients to avoid.

Your lungs are highly sensitive organs that were originally only designed to handle air. Smoke contains lots of different plant particles and other substances that don't belong in your lungs, and vapor is an improvement since it only contains vaporized water and oils.

Most vape juice, however, is designed to replicate the experience of smoking cigarettes, and as a result, it usually contains high concentrations of nicotine. The amount of nicotine present in vape juice varies, and it's even possible to purchase vape juice that does not contain any nicotine whatsoever.

Whether it's in the form of cigarettes, cigars, chewing tobacco, nicotine gum, or nicotine-infused vape juice, nicotine can cause health concerns. Primarily, it appears that nicotine negatively impacts your cardiovascular health and increases your risk of heart attack and stroke. If you want vape juice that is strictly safe, therefore, you might want to choose a nicotine-free option.

One dangerous ingredient that's especially important to look out for is vitamin E acetate. Commonly found in cannabis-infused vape juice, this harmful additive isn't as common in nicotine-infused or nicotine-free vape juice. Still, it's important to check the ingredients in your vape juice very carefully to make sure you're only inhaling substances that you're supposed to inhale.

Does vaping cause cancer?

We know that smoking can cause cancer, so it's natural to be concerned that the same might be true for vaping. However, it appears that substances other than nicotine are responsible for the cancer-causing effects of cigarettes.

For instance, cigarettes contain plant matter, which adheres to the inner lining of your lungs and can cause inflammation. Over time, this inflammation can lead to cell replication issues that evolve into cancer.

The tar in cigarettes can also harm your air passages and lead to tumor growth. Nicotine itself, however, does not appear to be carcinogenic though it can cause cardiovascular issues.

There is no indication that PG or VG cause cancer either. Since none of the three main ingredients in most types of vape juice are carcinogenic, it appears that vaping does not cause the same cancer risk as smoking.

Is vaping bad for your lungs?

The lungs are very sensitive organs, and it is up to medical researchers to establish the exact risks that vaping might pose to your pulmonary system. At the same time, however, we can say with certainty that vaping is less harmful to your lungs than smoking.

Nicotine appears to negatively impact your cardiovascular system, and since your heart and blood vessels play critical roles in your overall health, it's natural to expect that nicotine may also indirectly impact your lung health. Nicotine does not adversely affect your lungs directly, however.

There is also no indication that PG or VG have negative pulmonary effects. Dangerous ingredients sometimes used in low-quality vape juice, however, such as MCT oil and hemp seed oil, can cause lipoid pneumonia. While this condition is treatable, it can be deadly if left untreated.

Is vaping a drug, and does it get you high?

No, vaping is not a drug, and vaping will not get you high. It's true that there are some vape cartridges that contain THC, the active ingredient in marijuana, and using these vape cartridges will cause an intoxicating effect.

It's also possible to vaporize cannabis or hemp flower in devices called dry herb vape pens. These handheld devices are very different from the types of vaporizers that use vape juice, however, so it's easy to tell them apart.

Vape juices that contain nicotine may cause a slight psychoactive effect that users call a "buzz," but this effect is mild and does not affect your emotions or state of mind. If you want your head to remain entirely clear while still enjoying the benefits of vaping, you can always choose nicotine-free vape juice, which does not cause any psychoactive effects whatsoever.

Some people experience a psychological addiction to smoking cigarettes. They get so used to the act of smoking that they can't stop. In these cases, vaping may be less addictive than smoking since it breaks the habit while still providing nicotine.
For the most part, however, smoking is physiologically addictive. The main active ingredient in cigarettes, nicotine, causes physiological dependence that can be hard to break.

The opposite is also true, however. You can choose vape juice that has less nicotine than cigarettes, and if you want, you can gradually reduce the amount of nicotine in your vape juice. Over time, it's possible to eliminate the nicotine concentration in your vape juice until you're blowing clouds of vapor that are 100 percent nicotine-free.

Is it safe to vape while pregnant?

It is never safe to use nicotine while you are pregnant or nursing. There do not appear to be any negative effects, however, of vaping nicotine-free vape juice during pregnancy.

Can you take a vape on an airplane?

Regulations vary on carrying vape juice and vape pens on airplanes depending on where you live. Generally speaking, however, it is usually okay to bring vape juice on planes, and in fact, the TSA and other regulatory agencies strongly prefer that you carry your vape pen batteries in your carry-on luggage. Consumer air travel regulators view vape batteries as potential explosion risks if they are stored in checked baggage. We've written about battery safety here.

It is never okay, however, to use a vape pen on an airplane. Smoking was banned on commercial planes decades ago, and most airliners still view vaping as akin to smoking. Vaping during a flight could concern your fellow travelers, and doing so may even cause you to be removed from your flight.

How much does vaping cost?

Vaping is generally inexpensive. Most vape pen batteries cost between $20 and $50, and vape juice cartridges cost between $10 and $20. Depending on how much you vape, a single cartridge should last for a week or more, which means that you can conceivably vape for an entire month for less than $50.

A few factors may impact the cost of your vaping habit. Vape juice cartridges with increased amounts of nicotine, for instance, usually cost more, and vape juice from boutique manufacturers usually costs more than alternatives produced by run-of-the-mill companies.

The more you vape, the more vape juice you will use, so it makes sense to fully establish your vaping needs before you get started. You may also want to set a weekly or monthly budget for vaping to make sure you don't spend too much.

Can vaping save money?

As you consider the pros and cons of vaping, it's natural to wonder how this alternative to smoking might impact your personal finances. In general, most people who switch to vaping from smoking report that they save money.

Since it does not involve rolling plant matter into cigarettes with filters, producing vape juice is usually less expensive than making cigarettes. For the same concentration of nicotine, it might cost half the price to make vape juice as it would cost to make cigarettes.

This increased value is passed down to the end consumer, reducing the overall cost of vaping regardless of the concentration of nicotine in your vape juice. Many people who start vaping also report that they gradually reduce their nicotine intake, which lessens the cost of vaping over time.

Vaping is also less wasteful than smoking, which means the long-term environmental costs of nicotine use are reduced when you switch to vaping. Every pack of cigarettes contains 20 fiberglass filters that do not biodegrade. Vape pens, however, are rechargeable, and many of the components they contain are recyclable.