The pod market is probably one of the most competitive at the moment, with each
manufacturer trying to stand out from the others by means that often do not go beyond
aesthetics. Vaporesso is not the type to do like everyone else, and each release of
equipment brings a little touch of innovation. The Degree pod is proof of this and allows
you to go to the next level with options that are not usually found on this type of product.
Let's find out immediately why the Degree will make you forget the other pods.

A compact, successful and quality design 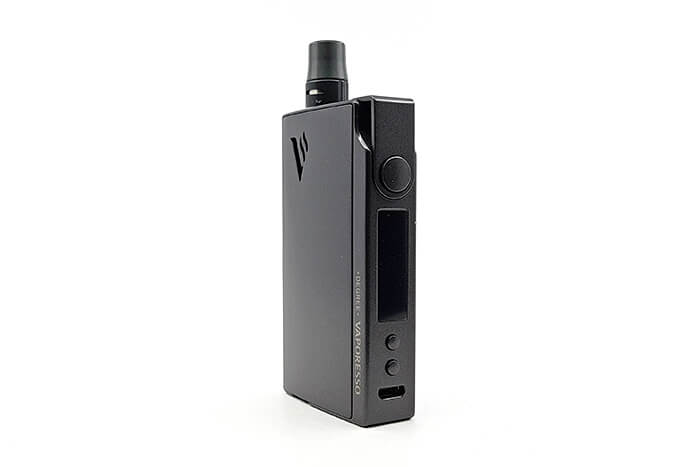 It must be recognized that the design of the Degree is clearly different from what we are
used to seeing. Beyond its performances, which we will see later, aesthetics is an
important point that Vaporesso has taken care of by bringing a certain class to it.

Its rectangular shape is already an uncommon trend in the pod world, with the square or
oval shape often being preferred. The fact that its dimensions are reduced reduces the
"brick" effect, which could be aggressive for some people. With a width of 41 mm, a
thickness of 16.5 mm and a height of 77 mm without the drip tip, the Vaporesso Degree
looks more like a very small box than a pod. 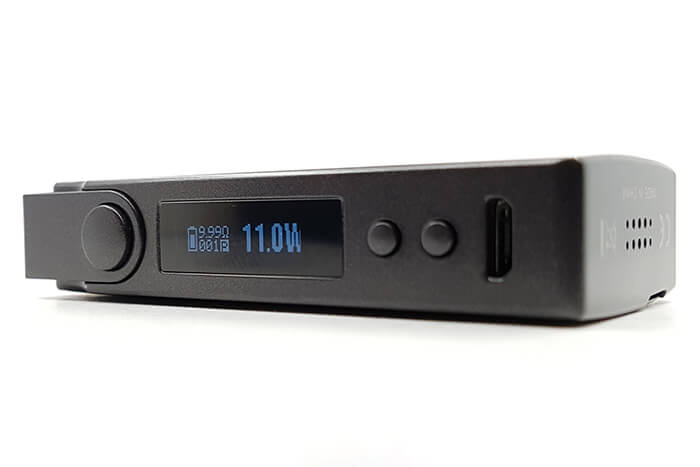 This effect is further accentuated by the fact that on one side there is a fire button, a 0.69-
inch OLED display, two adjustment buttons + and - and a USB microphone port. Yes, you
read correctly, the Degree of Vaporesso is presented as an electronic box, but still a pod.
And that's where the Degree makes a big difference: it's adjustable, easy to use and
visually delivers important information on its display. But that's not all. 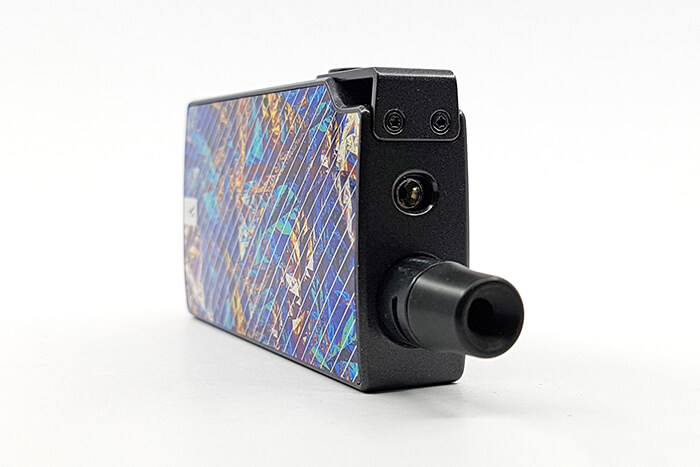 At the level of the fire button, you can see a passage to pass a strap or a strap. With a
weight of 130g with a full tank of liquid, it is indeed possible to wear it around the neck,
otherwise any pocket will accommodate it. with joy. 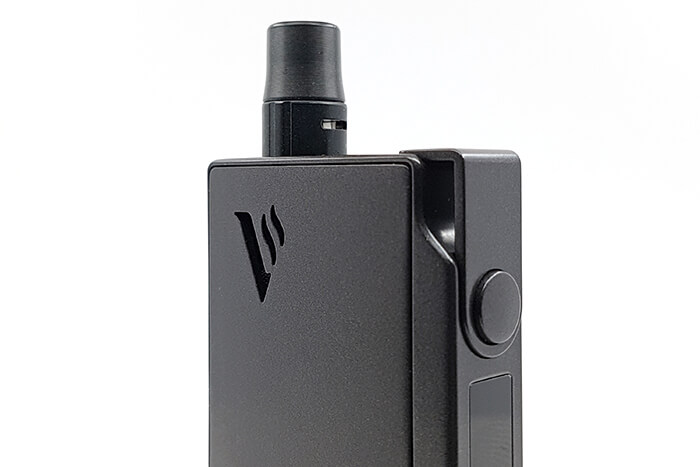 At the top is the normal size drip tip, not a tip that looks like a garden hose, but is a
proprietary format, so you won't be able to change it. However, its diameter is close to a
drip tip 510 and perfectly calibrated for the steam delivered by the Degree, it is pleasant to
use. 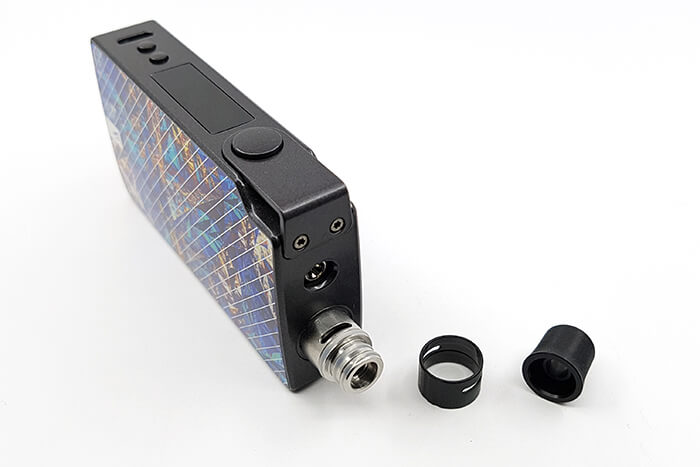 If this drip tip is of a specific format, it is because it has an adjustable air inlet. Again, how
many pods have an accessible adjustment without disassembling anything? The rotation
ring at the base of the drip tip is held by a perfectly calibrated seal that allows easy rotation
without it being inadvertently out of control. 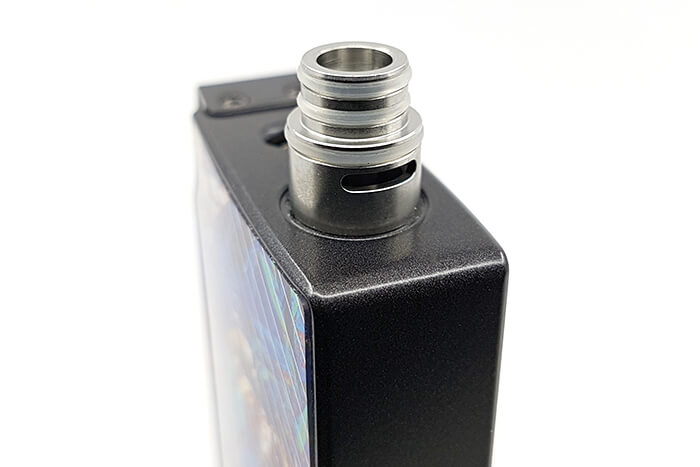 The air flow is progressive, it is not on/off, ranging from a tight draft, but usable for those
who vaporize by indirect inhalation, to a flow that allows direct inhalation with a restriction.
For this last mode, don't expect the Vaporesso Degree to deliver a cloudy and dense
steam to you to make tricks, it's not its vocation, but the steam produced is ideal to vaper
in a place where it could disturb other people. 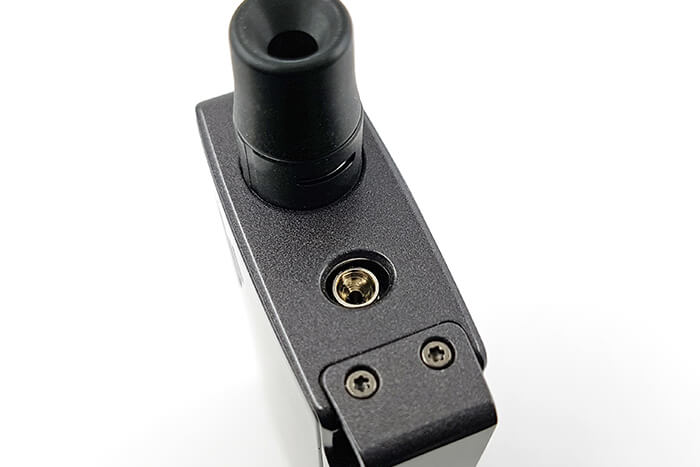 Always at the top is the filling system, which is also original and well designed. Instead of
removing the cartridge to fill it, on the Degree it is sufficient to insert the tip of the vial of
liquid into the spring-loaded valve which is an integral part of the cartridge, and which is
accessible without removing anything. 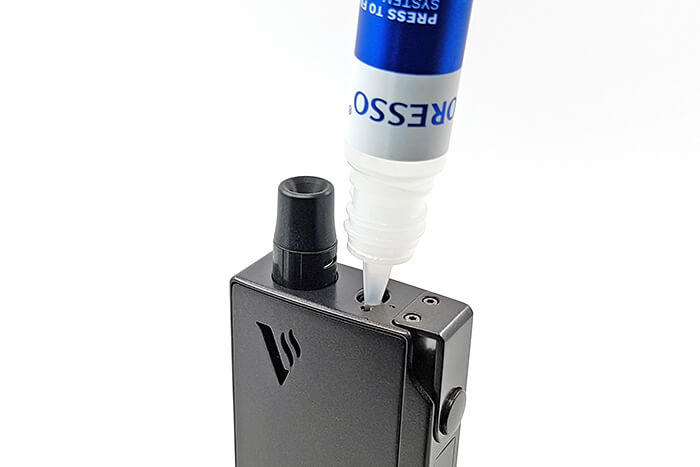 Easier it starts to get difficult and filling can be done in all circumstances since there is
nothing to disassemble. However, the tip of your vial must be thin and if not, an empty vial
with the appropriate tip is provided in the box, Vaporesso thinks of everything:) 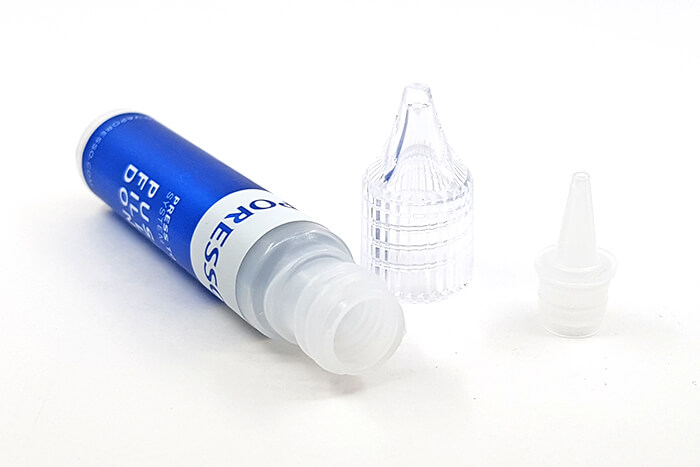 We had already seen this system on the Delta Squonk Mod box of Revenant Vape, a
company that works closely with Vaporesso. Using this box every day, I can assure you
that this system works perfectly and this filling is by far the most practical of my different
squonk boxes. Having implemented this system on the Degree is undoubtedly a big plus
and an undeniable comfort of use when the time for filling has come. 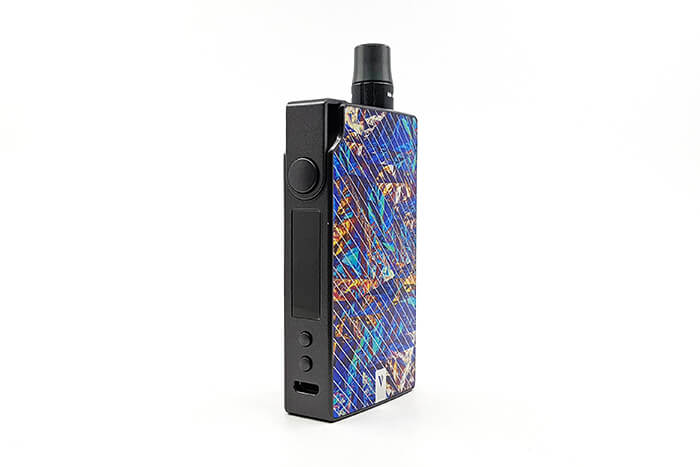 For the facades, the first one is fixed and consists of a resin or carbon pattern. The
patterns are original and the rest of the pod exists in 2 shades, we will also note that for
some the drip tip is matching.

If the coloured patterns do not suit you, the versions with carbon facades remain a classic,
but always appreciated. 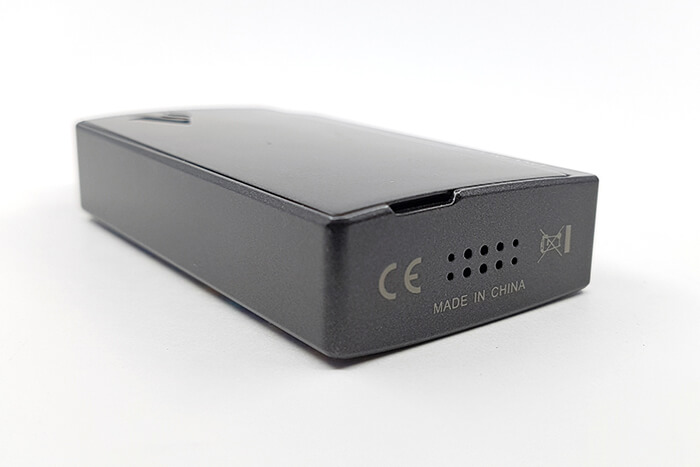 The second front panel is removable and of the same colour as the rest of the pod. To
remove it, simply pass a nail through the gap at the bottom of the pod and lift it up. Held in
place by 3 magnets, once in place it does not move one iota. On the back there is a small
reminder about the resistance.

So that's where you get to the cartridge, but the first thing you notice is the AXON chip
inscription. For those who are just starting out, an electronic box or pod is managed by a
chip that is controlled by integrated software. This is called a chipset and Axon is the name
of the latest chipset created by Vaporesso.

We discovered all its qualities in the Gen box released there can be, and it is a surprise to
find it here. In general, pod chipsets are dedicated, specific and limited in their
performance. Returning to the Axon on the Vaporesso Degree is rather good news for the
future and indicates that Vaporesso has therefore designed its chipset so that it can be
adapted to very different hardware configurations. 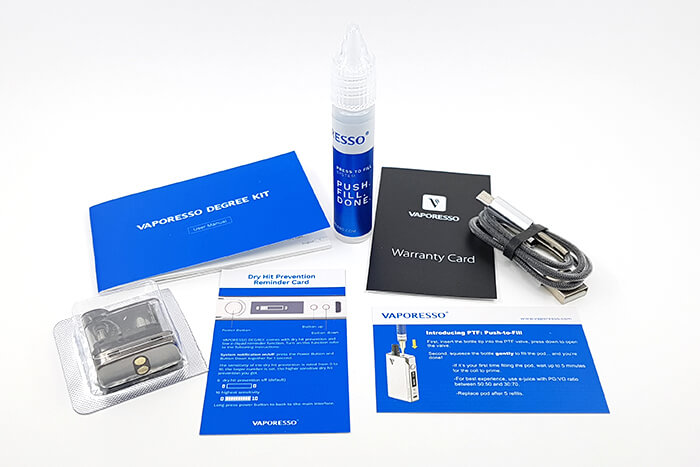 The Degree box is complete with 2 cartridges, including one already installed, the micro
USB charging cable, an empty vial to transfer your liquids that are in a bottle that would
have a tip that would not fit into the filling valve, a manual with a French part and two small
cards reminding you of important information about detecting a lack of liquid and filling. 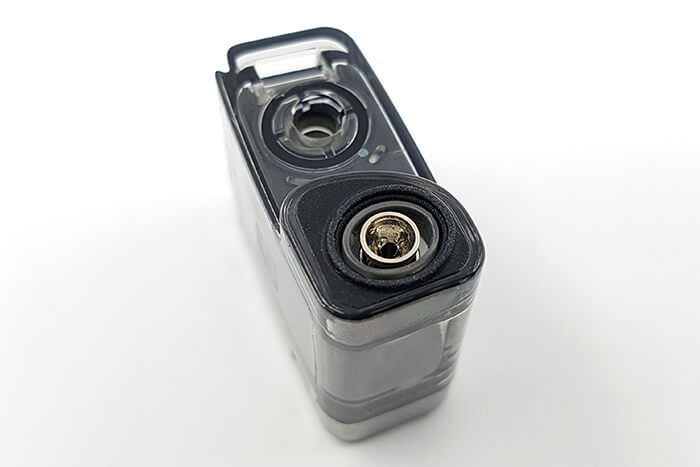 The Degree cartridge is as it is in the pod tradition, completely sealed and nothing can be
replaced except the cartridge itself. With a capacity of 2ml, it fills as we saw previously
from above from above, the filling valve being part of the cartridge. 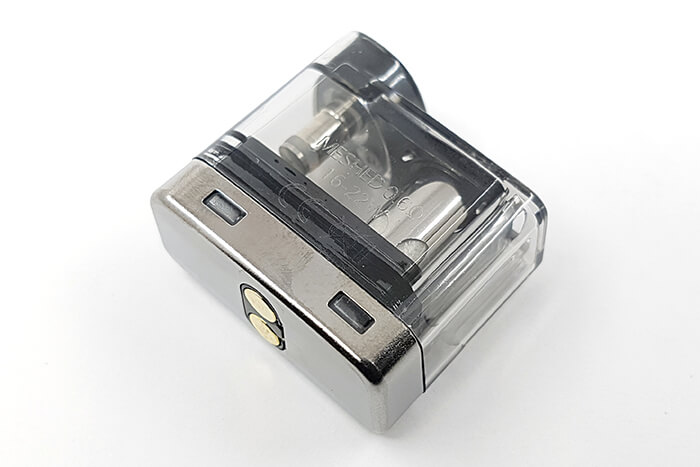 Inside we find a resistance with cotton, and below it the positive and negative connection.
The 950 mAh battery is located in the pod below the cartridge and is not accessible. 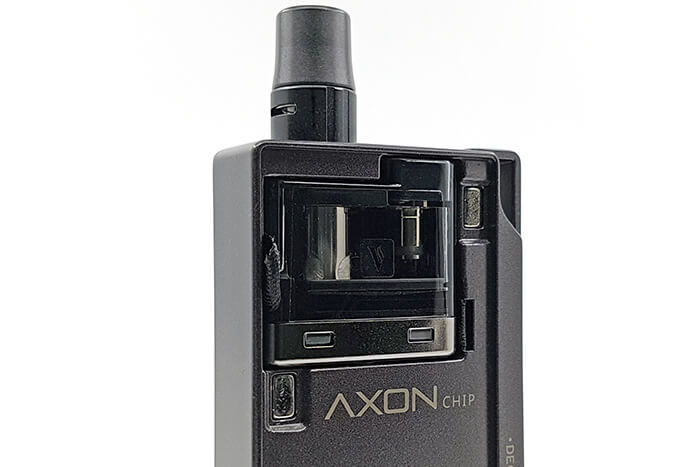 To remove the drum, simply pull the test strip and the drum comes out on its own. Nothing
flows once removed, you can even put it upside down, there won't be a drop. 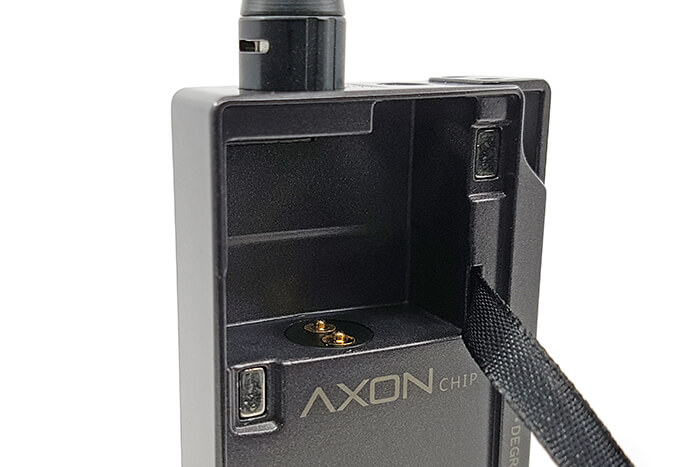 To date, there are two types of cartridges and they are provided in the box. 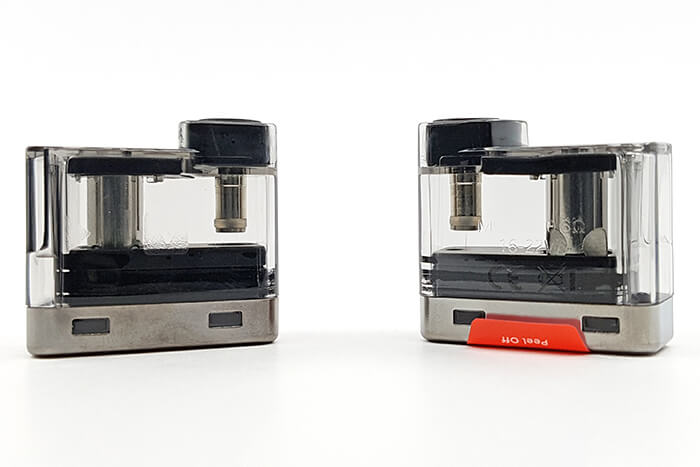 The first one that is installed by default is the Meshed 0.6 ohm. This cartridge is for
vaporizers who wish to inhale directly at a power that can vary from 16 to 22 W. It is
possible to use liquid with a PG/VG ratio ranging from 50/50 to 30/70, with a
recommendation from Vaporesso for the latter. The resistance is made up of a mesh, a
kind of roasting, which produces reasonable steam and excellent flavours.

The second cartridge is of the same capacity and contains a porous ceramic resistance
CCELL Pod of 1.3 ohms for a recommended power of 7 to 12.5w. This cartridge is for
indirect inhalation vapors with a nicotine level more suitable for those who are new to or
want to use nicotine-salt-based liquids. Here again, the flavours are excellent, the pleasure
is real.

A well adapted and very easy to use chipset

One of the strong points of the Vaporesso Degree is undoubtedly the fact that it can be
used as a conventional box without having all the functions that would be useless for a
pod. To vaper, you have to press a button and you can change the power. This is different
from a conventional pod.

As we saw earlier in the article, the chipset that is embedded is the Axon. This chipset has
many qualities and its integration in the Degree allows to deliver a power up to 30 W.

The Degree has multiple protections such as automatic shutdown if the fire button is
pressed for more than 10 seconds, short circuit detection protects the battery when it has
reached a certain level of discharge and vice versa when it is fully charged to avoid
overcharging. It should be noted that the battery is fully charged in about 30 minutes with a
2A charge.

n terms of the possibilities offered, the Degree automatically recognizes the inserted
cartridge, or more precisely the type of resistance, and adjusts the power in an average
use value. With the cartridge having a resistance of 0.6 ohm, the default value chosen
when installing it is 20 W, knowing that it can be used between 16 and 22 W. For the 1.3
ohm cartridge, the proposed value is 10 W, its use can vary between 7 and 12.5 W. This
recognition, and especially the power management, is a very interesting point for
beginners who are a priori the target user of the Degree. Too many pods do not offer any
adjustment and by default, they deliver a vape that is not necessarily suitable for all users.
In the interest of safety, if it is possible to reduce the power below what is recommended
for each of the two cartridges, it is not possible to exceed the maximum value. The risk of
damage to the resistance cannot therefore be due to a power error that is too high.

The second factor that can damage the resistance is the lack of liquid. Here again,
Vaporesso has provided this possibility and the Degree detects alone if liquid is missing by
displaying it on the "low e-liquid" screen and by switching off the use of the fire button by
itself. However, this setting can be changed depending on the type of liquid you are using.
10 detection sensitivity settings are possible. If you have a cut and the message indicating
that liquid is missing when the level is higher than the cotton of the resistance, you will
have to lower this sensitivity level.

Be careful, however, level 0 corresponds to deactivating it and you will then have to be
vigilant if there is any change in taste that indicates to refuel or risk permanently damaging
the resistance.

Combined with the impossibility of exceeding the power that the resistance can handle,
these two options therefore ensure an optimum lifetime of the resistance and no chance of
knowing the dry hit!

The orders are few in number, which makes it easy to retain them. The challenge of
Vaporesso to offer more possibilities and safety while remaining accessible to all is
therefore won.

The Degree pod is far from being a conventional pod. Vaporesso has not only given it a
certain elegance in a compact format, but also added features that are not found on other
pods, without forgetting what users like about this type of equipment: simplicity.

Its finishes are exemplary, the choice of different interesting colours, the filling system is
practical, it is possible to inhale directly or indirectly, its dimensions make it the ideal
companion that can accompany you anywhere. Wouldn't we be in the presence of one of
the best pods of the year?

This article is originally created by our partner vapoclope, you could click here to read the original french version.

GET UP TO DATE NEW STRAIGHT FROM US.
ENTER YOUR EMAIL FOR SPECIAL PROMOTIONS AND
INFORMATION ON NEW UPCOMING PRODUCTS.

SEE WHAT WE ARE DOING IN THE OFFICE.
NEW PRODUCTS. GIVEAWAYS.